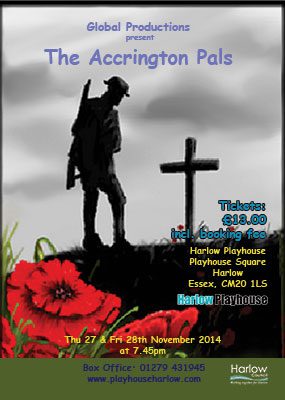 Email from a member of the audience

I came to see Accrington Pals at the Playhouse on Thursday evening. I thought it was very clever that with so few actors there was a real sense of more people being involved. It was very moving. There were quite a few people with learning disabilities in the audience, members of Razed Roof Theatre Group. They were really into the play too as was a lady who sat near to me whose Great Grandfather was an Accrington Pal. Well done.

THE ACCRINGTON Pals is not an easy play to perform. The Peter Whelan play charts the life of ordinary Lancastrians before they went off to war in 1914.

Life is pretty grim at home and it is about to get grimmer.

The whole play is held together by the matriarchal May, played by Sue Macpherson. Sue pitches the part perfectly as May tries to keep mind and body together as well as a fear and yearning for young artist Tom, played by David Baker. David also performed very well as the young artist with burning desire and a lust for life.

It was the shadow of inevitability that hangs over the piece and the production, thanked to the design of the set and the pace and judgement of director and actors that gave a claustrophobic feel.

But there was humour, often bawdy northern humour, an example of which was the performance of Eve by Jennifer Gillin. She conveyed a huge amount of warmth and emotion but with depth as well.

It is a long play, with many changes, that require a great deal of discipline. The actors all interacted very well. Young actors such as Tanya Mcpherson and Abigail Baker were full of vitality whilst veterans (sorry Chris!) such as Chris Millington produced a haunting cameo role as the CSM.

As we look back on the Great War, sone of us don?t want chocolate box versions but rather gritty reflections such as The Accrington Pals.

A stirring end and well done to the director, Michael Philips, for his deft production. 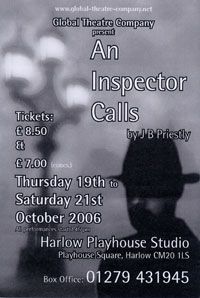 An Inspector Calls by J.B. Priestley. In the play the Inspector Goole, who is played by award winning Chris Millington, calls unexpectedly on the prosperous Birling family and their peaceful dinner party is shattered by his investigations into their involvement in the death of a young woman whom each in turn has exploited.

In his position as joint Harlow council leader, you would think Chris Millington is familiar with visits from inspectors. After all, Audit Commission representatives are regular visitors to the civic centre to access the authority’s performance.

Indeed, Mr Millington may well have drawn on these experiences when he took on the lead role in this J B Priestley classic. Midlands industrialists the Birlings- Arthur (Keith Cummings), Sybil (Elaine Elliott), daughter Sheila (Alison Roberts), and son Eric (Mark Simons) – are celebrating Sheila’s engagement to businessman Gerald Croft (Richard Holliss) when they are interrupted by Inspector Goole (Chris Millington), who is investigating the suicide of a local woman.

What ensures is a twist on the popular ‘whodunnit’ as the Inspector details the last two years of her wretched life and insists someone drove her to take her life.
One by one the group confess how their lives had entwined with hers , but there is something not right about Goole and they realise he isn’t all he makes out to be.
Cummings and Millington were captivating as competing alpha males vying to gain control and Roberts, while hamming it up a little at times, was pleasing to watch.
Holliss complemented her well and was at ease with his role, but Simons was less so and at times appeared stilted.

The play’s quality rollercoasters so greatly, creating superb tension before a disappointng ending, that this was a case of the cast making the best of less-than-great material.

While doing extremely well to draw out the themes of responsibility, class and sex, the company may do well to carry out their own audit and leave Priestley alone for the foreseeable future.

Their evening is interrupted by the sudden arrival of the mysterious Inspector Goole, who proceeds to question each family member in turnas to their connection with a recently deceased young woman, believed to have taken her own life. Chris Millington was well cast in the part of Inspector Goole, his sardonic delivery lending his character the very air of mysterious superiority he requires. Keith Cummings as Arthur Birling, father of the family and Elaine Elliott as the mother, Sybil, both created strong, well rounded characters; the gradual disintegration of their self-centred existence was shown with much feeling here.

Mark Simons showed considerable talent in his sensitive portrayal of Eric, the Birlings drunken, wayward son, as did Alison Roberts in the role of his romantic sister, Sheila, with both actors displaying a real aptitude for these emotionally challenging roles.
The character of Gerald Croft, Sheila’s fiancee with a secret past was given a nice mix of respectability and naivete by Richard Holliss, who despite having to learn the part with just days to go manageda faultless performances.

This was an accomplished ensemble productions, with each cast member putting in a thoughtful and polished performance. The simple but stylish set created the feeling of an upper-class drawing room and the sound and lighting was excellent. An accomplished production and a great evening’s entertainment. 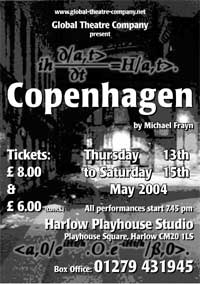 Copenhagen is a different Michael Frayn production, a three-way marathon from the beginning of modern atomic theory to Hiroshima. It requires concentration and dedication not only by the actors but also by the audience, which needs to get under the surface to understand the depth of the relationship and the scientific reasons for what they did or did not do.

Chris Millington, Elaine Elliott and Keith Cummings kept us engrossed as they unravelled the whys and wherefores from beyond the grave. Far from being bored by so many words, the direction of Michael Philips tranfixed our attention on the knowledge not previously available.

It was a difficult subject to contend with but these three. with some effective lighting and sound from Dave mason, clearly and volubly set the seed of doubt and questioned once again what kind of world it would be if alternative decisions were made.

GLORIOUS STORY OF A NUCLEAR FUSION

Meeting between two nuclear physicists in the titular Danish capital may not sound like a recipe for exciting human drama but that’s exactly what we got in this glorious adaptation of Michael Frayan’s superb play.

The importance of the encounter between Danish scientist Niels Bohr, his wife Margrethe and his German colleague/friend Werner Heisenberg in 1941 cannot be overstated as Frayn suggests it literally decided the fate of World War Two.

Although no-one for sure knows why Heisenberg went to Copenhagen, Frayn hints it was because, appalled at the prospects of developing a nuclear bomb for Hitler, he was prepared to risk everything to ensure the Allies got the upper hand.

Via scenes in which all three are dead and their spirits look back with the benefit of hindsight other motives emerge, including Heisenberg’s desire to seek understanding from his friend and father figure when he didn’t understand himself.

Bearing in mind the mind-melting subject matter of two men chatting about quantum theory, the uncertainty principle and the chemical composition of isotopes, Frayn uses this as an analogy to explore the spiky relationship between the two scientists.

In the wrong hands it could have been a recipe for disaster, but Global flawlessly cut through the complexities and presented that most basic of theatrical concepts- a stirring human drama.

Elaine Elliott gave Margrethe the necessary layman’s perspective, while Keith Cummings and Chris Millington ( a Harlow councillor in his spare time) as Bohr and Heisenberg were mesmerising as the two men who come to realise the sheer weight of responsibility on their shoulders.

Unshowy direction By Michael Philips suited the pared-down approach by global which just goes to prove you don’t need a laser show and big bangs to make a first-class production. 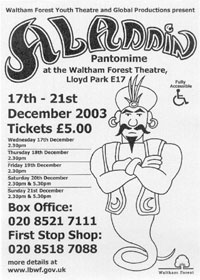