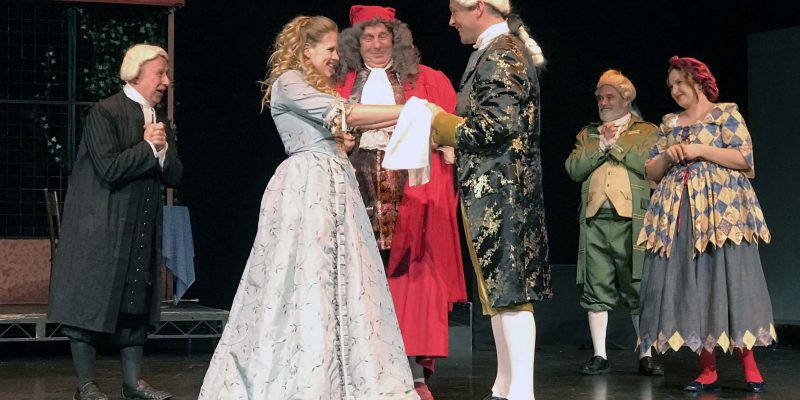 When the trickster, Truffaldino, signs on to serve two masters at once in the hope of double wages and double dinners, chaos and hilarity ensue. Full of mistaken identities, broken engagements, re-united lovers and dodgy servants, this is classic comedy at its best.

In order of appearance

Carlo Goldoni’s 1746 farcical Italian comedy The Servant To Two Masters included a number of scenes that relied heavily on improvisation. This was par for the course as the play embraced a style of theatrical form known as the commedia dell’arte (comedy of the profession), which had dominated European theatre for almost three hundred years. A true definition of commedia dell’arte was a play that relied on stock characters, (or what we now refer to as stereotypes) and exaggerated performances. The actor’s faces were usually concealed by masks, which gave playwrights an opportunity to poke fun at political and social events through witticisms and improvised dialogue.

Successfully making the transition into both ballet and music, it was also not unusual to see satirical sideswipes at class and religion. Although this particular form of theatre is now considered obsolete, it could be argued that the commedia dell’arte still exists today in the guise of the pantomime. Certainly the convoluted plot of A Servant To Two Masters demands a pantomimic approach. Beatrice travels to Venice disguised as her dead brother Federigo in order to track down his killer Florindo, who also happens to be her lover. She seeks the dowry money from Pantaloon the father of Clarice to whom her brother was betrothed. Thinking Federigo dead, Clarice however, wants to marry Dr. Lombardi’s hotheaded son Silvio. So Federigo’s unexpected ‘return’ from the grave is a terrible shock. This is by way of a sub-plot to the scheming of Beatrice’s servant Truffaldino. Meeting up with Florindo he sees the chance to make more money and fill his aching belly (popular themes in this sort of comedy) by serving two masters instead of one. But chaos ensues when Truffaldino mixes up letters intended for each of his two employers, both of whom spend most of the play unaware of each other’s existence.

A few years after its debut, Goldoni concerned about what he called the decadence of the commedia dell’arte style, substituted the improvised scenes with scripted dialogue. And it’s this version that playwright Lee Hall (Billy Elliot: The Musical) adapted for his own 1999 Young Vic and RSC production. Hall’s interpretation, rather than Goldoni’s has been dusted off by the Global Theatre Company as this year’s entry for the Minack Theatre’s summer season. But with the date for the Cornwall venue still some weeks off, a North London audience was recently treated to a sneak preview at the Harlow Playhouse in Essex. Opting for the main auditorium, rather than the intimate confines of the studio –and with a minimal, but functional set – the entire cast deserved full credit for managing to fill the theatre’s cavernous space with a performance that was both entertaining and energetic. And even though the use of masks was dropped, Chrissy Fryer’s dazzling costumes provided a fitting tribute to the visual style of the commedia dell’arte.

Actors David Millard and Chris Millington, as Pantaloon and Dr. Lombardi respectively, set the play in motion with sharp characterisation and fiery exchanges. Both these actors have tremendous stage presence. Millard’s penchant for physical comedy cut an imposing figure. His mane of unkempt hair and swirling red coat epitomising the style of the period, while his frantic machinations were a marvellous foil for co-star Millington’s memorable role as the blustering, pompous Lombardi. Jennifer Dorian played the demure Clarice with great feeling, her love for Silvio threatened by the sudden arrival of a ‘dead’ suitor and a pre-arranged marriage. Her spurned paramour Silvio also evoked our sympathies throughout, thanks to a consummate performance from actor Lee Ocsko.

But the strength of A Servant To Two Masters rests squarely on the shoulders of its chief protagonist, the wily and scheming servant, Truffaldino. And actor Dave Perry was perfect casting. In his Harlequinesque patchwork costume, he leapt about the stage, pirouetting and cartwheeling his way through the lives of those he encountered. It was a highly energised performance and a delight to watch. He does, however, ultimately meet his match in the form of ladies maid, Smeraldina. A feisty character from the outset with strong opinions on the opposite sex, Smeraldina was beautifully played by Johanna Grace.

Lucy Ashton was excellent in the dual role of Beatrice and Federigo. When she and lover Florindo – thinking each other dead –parody the denouement from Romeo and Juliet, it was carried out with great poignancy. And the scene in which the reunited lovers anticipated their upcoming nuptials was made all the more amusing by a total transformation of Florindo’s character (brilliantly played by David Reed) from stoicism to vulnerability. Simon Billig, with his amusing cod-Midlands accent pottered about the stage as local Innkeeper Brighella. And with the majority of the play’s more farcical moments taking place in the vicinity of his establishment, he was often aided and abetted by his three dysfunctional waiters, each of whom was played with tongue firmly in cheek by Terry Perkins, Dominic Kinnaird and Elaine Elliott. And the scene in which Truffaldino juggled dinner courses between his two unsuspecting masters offered plenty of scope for the minor characters to engage in additional business.

Solo musician John Candor provided live instrumental on a fittingly period Clarini, and was the only accompaniment to a rather sedate dance routine by Jacky Logan that top and tailed the play. Perhaps, on reflection, a faster tempo for the opening dance would have provided a more suitable curtain raiser for the madcap events that followed. And while Candor’s spirited playing was perfectly synchronised to the antics of the restaurant scene, the ‘tinkling’ melody seemed at odds with the sword fight – a tightly choreographed dual in which the cocky Silvio is out-maneuvered by Beatrice. The Servant To Two Masters requires precise timing and plenty of pace, while the script can only benefit from dialogue delivered with sharp, crisp enunciation. For the most part, award-winning director Michael Philips has achieved this goal and the production will no doubt leave the Minack audiences in stitches.